Jahan Co. FZC
0
Product was successfully added to your cart

From the proven HiPath 4000, OpenScape 4000 has already sold more than 25 million ports in 80 countries across the globe.

With the new OpenScape 4000 V7 software architecture, it is designed to offer customers cost-effective communication choices to optimize and secure communications that help enterprises increase workplace productivity and effectiveness. As a powerful and highly available communications solution, it offers a rich set of endpoints, mobility choices, branch office solutions, unified communications and standards-based integration and interoperability with business-critical applications and systems. OpenScape 4000 supports this capability with its built-in assistant and powerful set of system management applications that are easy to use and provide a feature-rich capability to system administrators. Coupled with a strong global presence and availability of OpenScale services, it allows enterprises to maintain business continuity and to focus on their own strengths .

OpenScape 4000 V7 offers an ideal solution for an enterprise communications infrastructure – regardless of size and location requirements. With its modularity, the availability of scalable access points, software-based branches, plus powerful networking support – analog, TDM, or IP – it provides a perfect solution for seamless expansion and can be integrated in any IP infrastructure.

The AP 3700 access points and the new OpenScape Access modules fit in a standard 19- inch shelf and are integrated directly in the IT infrastructure.

The OpenScape 4000 communication server can be flexibly implemented in configurations to support smallest to the largest enterprise. It supports up to 15 directly connected access points plus 83 IP-distributed access points, OpenScape Access or SoftGate branches.

A maximum of 12,000 subscribers can be supported in these configurations per OpenScape 4000 communication server. Configurations with up to 100,000 users can be implemented without difficulty in networked systems.

The modular structure of OpenScape 4000 also enables cost-effective resilience solutions to be realized in small and mid-sized configurations.

The new architecture of the converged IP system OpenScape 4000 allows a pure software installation at a standard server that is equipped with a Linux operating system. With this software version, existing customer solutions can be migrated to a data center and IT-based solution in which traditional TDM and analog devices as well as CO trunks are still supported.

Both deployment options support up to 12,000 users per EcoServer or VMware® deployment. Up to 100,000 users can be managed by the OpenScape 4000 Manager system administration software.

EcoServer is the new system control unit of OpenScape 4000. The 1,5-rackunits-sized, 19-inch housing contains the complete Simplex control unit including the alarm interfaces and connectors for AP3x00 Access Points. According to the Unify Green IT-Roadmap, we strive wherever it is possible to acquire environmental labeling. Unify is an active partner in the ENERGY STAR program for EnterpriseServer, and the OpenScape 4000 EcoServer has been certified by ENERGY STAR programm specification.

OpenScape 4000 can also run on VMware® infrastructure on a Linux host operating system and is qualified for the usage in data centers. This virtual solution offers high scalability in the same way like EcoServer hardware. High security requirements will be ensured by VMware® features, such as vMotion and High Availability.

The OpenScape 4000 SoftGate application provides cost-effective VoIP functionalities with reliable branch survivability options and an easy IT integration in the OpenScape 4000 solution and management suite. This new software application offers full HiPath feature access for IP endpoints and SIP connectivity for trunking and subscriber, based upon a standard server with Linux SLES 11 SP1.

Any OpenScape 4000 SoftGate site integrates seamlessly in the communication system and network like any IPDA access point (AP 3700 IP with HG 3500) – in terms of features and administration.
The open architecture of the OpenScape 4000 SoftGate application enables integration in a VMware® virtualization environment.
this application can also be used for the software-based implementation of music on hold as well as synchronous and asynchronous announcement texts.
The Secure Remote Subscriber function supports secure remote operating while providing the complete feature set. With this application, customers can reduce capital cost (CAPEX) plus operational cost (OPEX) and deploy centralized applications with uniform user experience. 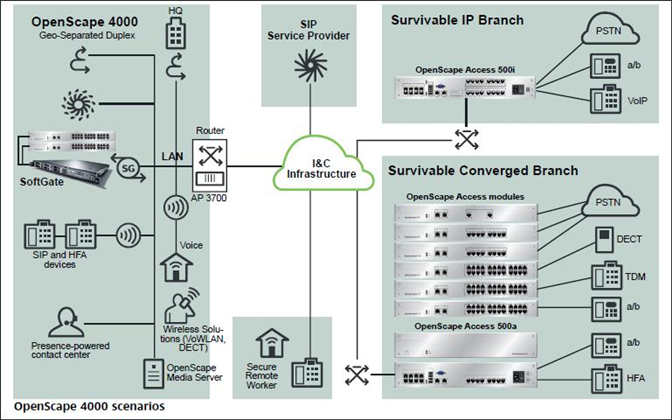 This function performs that voice is routed via PSTN and signaling is routed via IP or PSTN survivability connections for IP branches. This expanded survivability functionality can be used as an alternative dynamic path if the IP network fails, all available VoIP resources are occupied, or IP quality is found to be poor. Also, static configuration of payload routing over PSTN can be used for smooth transformations of existing branch offices from PSTN to IP networking.
This flexible mix between IP and TDM networking for payload and best possible signaling capabilities allows the migration to homogeneous branch networks and the implementation of centralized applications at individual pace.

OpenScape 4000 Flex License is the new brand name for the flexible licensing concept that is used for the enterprise-class functionalities that are supported for the different subscriber and trunking interfaces.
Every analog, TDM, IP, cordless (DECT), and WLAN subscriber interface is part of the Flex License. The same is valid for every analog, TDM, and IP trunking interface.
Flex License offers the highest possible flexibility in license investments.

• Flexible configuration of local tones and announcements per branch office

• Display of a picture from an LDAP directory in a call

• Override and prevention of override

• Acoustic and visual status for Signaling and Payload encryption

• … and much more
Regardless of whether you provide the desktops of your staff with digital system phones or IP phones of the OpenStage family, the handling or, respectively, the user interface to activate the features is identical on all phones.

• Deployment of central applications like OpenScape Xpressions and OpenScape UC

• Optimized use of the corporate network through cost-optimized routing (Least Cost Routing, LCR)

Know More About Us

Jahan Co. was founded in 2004 by the target of selling and installation of Siemens Telecommunication systems .after termination of Siemens enterprise section,Jahan Co. started a new approach by Unify Telephony systems .

Search In The Site